ARTICLE: “The Offering of Mount Meru” On Buddhist Cosmology in History of Science in Tibet 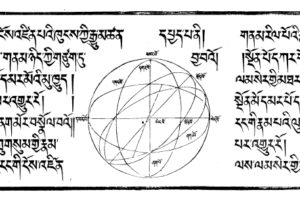 Abstract: Convergences and conflicts in the dialogue between Buddhism and modern science occasionally find precedent in historical sources and encounters, some of which have set the stage for scenarios that are commonplace in the current dialogue. This paper brings recent scholarship and Tibetan sources on astronomy and geography in Tibet into conversation with the ongoing Buddhism and science dialogue. In response to a lack of context in the dialogue, the paper gives attention to how two contexts in particular, namely, the contemplative and historical, inform currents in the Buddhism and science dialogue about cosmology. The paper challenges claims made that Tibetans did not encounter European science until the twentieth century and that Tibetans were unaware of scientific cosmological ideas, and therefore have not updated the Buddhist Mount Meru cosmology. To address tensions inherent in the binary discourse on science vs religion, this paper asks, does the Mount Meru cosmology represent a domain wherein Buddhism or science hold more appropriate tools for meaningful discourse and resolution about its existence?